Although I have always wanted to paddle this section of the Snowy, lack of people willing to brave the cold, locked gates, unknown water levels combined with alternative paddling options have always relegated this trip to my wishlist. However, sipping coffee in Corryong in the comfort of a sunny 20 degree day I became increasingly confident that this year would be the one.

Although a Ranger confirmed an earlier report from the NPWS website advising of delayed opening of the access road I was sure the only obstacle that stood between us and the upper Snowy was one person and his urge to paddle Leather Barrel Creek. Luckily that creek had no water. Arriving at the Spencer’s Creek picnic area, where the reported snow depth was still more than a metre, it became obvious that the Ranger was right.

Some more progressive members proclaiming a skill of opening gates “the environmentally friendly way” were given the opportunity to show off their talent, which they declined following a cost benefit analysis. We had a glimmer of hope when Park Rangers suddenly turned up but to our amusement, their lock was not part of the chain that locked the gate. Our progress now lay solely in the hands of the gate keeper that opens the gate at 10am to let cars in and out of the lodges at Charlottes Pass.

Looking at the number people seeking access and taking into consideration the number of cars we wished to drive up – enough to fill the car park at Charlottes – I revised my probability of success and proceeded to get ready to drag the boat up from Spencers. What I failed to anticipate was that the guy coming to open the gate was actually a friend of one of the paddlers and he assured our entry into the gated community of Charlotte’s Pass.

At the turnoff to the village, it became apparent why the road was closed, completely covered by deep snow all the way up to the pass. We quickly got changed and started the march up the hill to the summit. Although I have done this walk many times, it has never been with a boat in tow. On top of the hill we were greeted by an awesome vista of the Main Range, with views towards Mt. Kosciuszko and the Blue Lake. There aren’t many things that can beat the sight of white capped mountains on a warm sunny day and the accompanying silence broken only by the distant rumble of the Snowy River. The feeling was shared by others, and we all agreed the trip was already a success and the paddling was just a bonus.

We briefly admired the scenery before jumping into our boats to try the new sport of snowboating ­– a rather entertaining mode of transport. The snow cover was patchy, the trees uncooperative and the scrub downright unfriendly. Nevertheless, we had some fun sliding down 200m vertical metres towards the Snowy River until the snow gave way to thicker Alpine scrub. Luckily I found a nice snow covered creek bed which made for a hair-raising toboggan run all the way down to the riverbank.

Some acrobatics from Tim made for a good laugh. If only I had the camera! As we were getting changed we watched skiers hesitantly wade across the river upstream and I made a mental note to refrain from rolling. As booties are not designed to walk on snow we quickly hopped in the boats, launched from the snowbank, and paddled into the unknown. Within 100m we reached the first gorge, described in the book as grade 3. The description was quite accurate, though based on the tightness and the consistency of the rapids I would grade it 3+. A couple of unplanned rolls later, the gorge finished with a short portage around a rocky rapid. As always, Ollie had a line but we all decided it was not worth the potential spanking. Once the gorge finished, the river widened into full-on gravel races and we turned our attention to the beautiful scenery and the deep snowbanks lining the banks. Unlike the Thredbo, where Tim’s altimeter indicated we paddled uphill towards the end, the Snowy continued to drop steadily. Though easier, the second gorge just above Spencer’s Creek was just as enjoyable as the first, and finished with a nice waterfall. We passed a group of skiers at the Illawong hut bridge before descending down numerous bouldery rapids of grade 3 standard which continued until the backwaters of the Guthega Dam.

This is definitely a section that should be paddled more regularly. The rapids are very enjoyable and the scenery is just stunning. 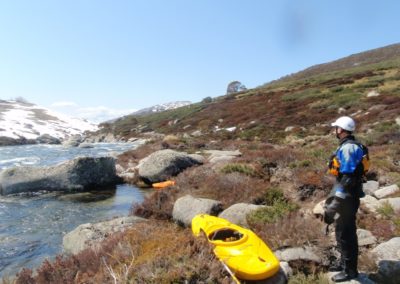 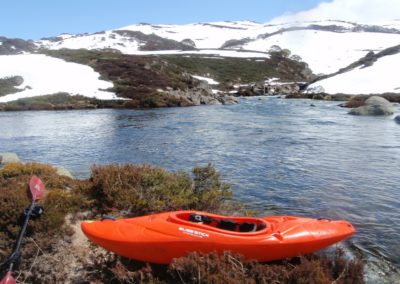 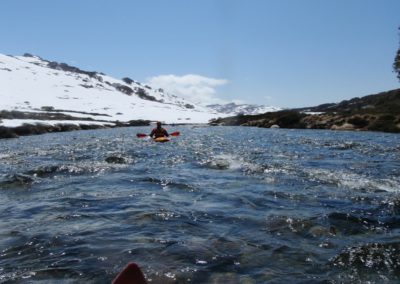 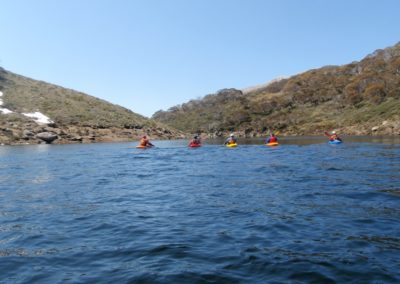 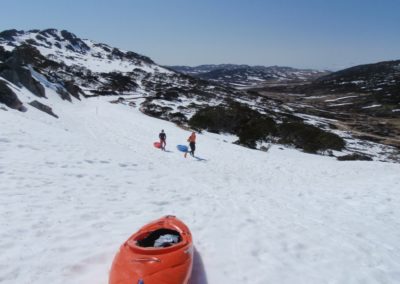 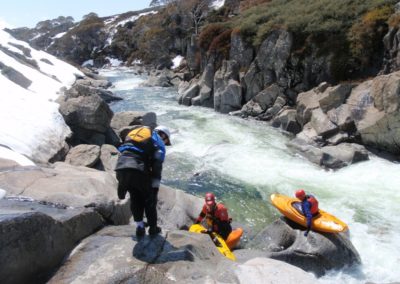 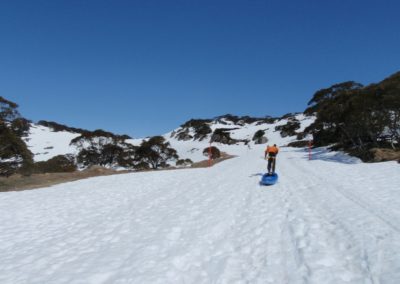 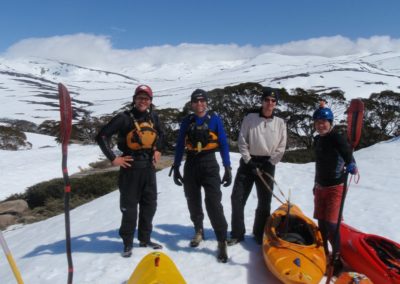 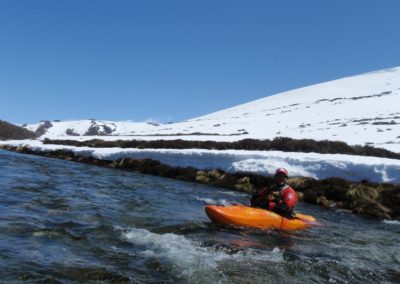 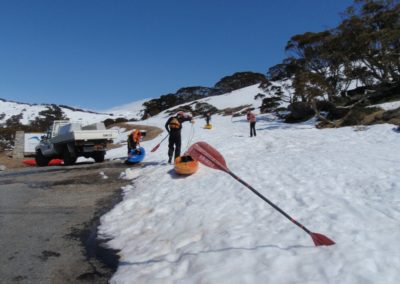 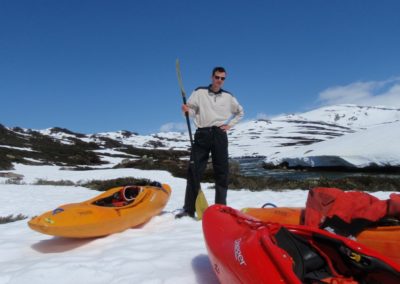 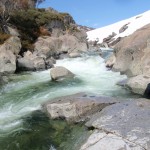