Party: Greg, Markus and the Jiri

Following substantial rain in the Sydney Basin in the days leading up to the weekend it didn’t take long for Greg – our resident expert on paddling rivers on the South Coast and Illawarra region – to post a trip to the list. Georges River was chosen as it has been seldom paddled and Greg’s previous attempt to conquer the river in high water had not been successful.

Considering the river’s proximity to the city (35 min), I was rather surprised the trip didn’t appeal to more people, with only Markus and me expressing interest. I assume paddlers were deterred by the unknown difficulty of the rapids and the dangers lurking in the suburbs of Minto and Macquarie Fields which frequently feature on the evening news and should be only entered at your own peril.

The river itself is actually quite nice and starts with a number of interesting rapids which culminate in a natural weir that spans the whole river. Legend has it that this rapid called the “Virgin Killer Falls” was attempted in high water by a party of two, with both paddlers being caught by the suckback necessitating a tactical exit followed by an involuntary visit of the cave behind the curtain. At this water level the rapid was very enjoyable and posed no such dangers.

A more overgrown section of the river followed but without a dam to hold back the rains, this river flushes more frequently with rapids generally cleaner than on the Nepean (one sieve of bushes) or the Cataract (whole damn river of bushes).

Following the Killer Rapid there are two other notable rapids on the river that should be inspected, especially in high water. The first one consists of a rocky garden that ends in a pourover down a slot. Although the rapid is reasonably straight forward, the entry is quite tricky due to a number of protruding trees. That is of course unless you display the talent of Markus who used the trees to execute a flawless 360 degree spin before boofing the rock above the slot. Naturally Jiri was forced to roll in the slot.

The second rapid, half-way down the river, is a 2-3m broken waterfall across the width of the river. Unfortunately, although there are a number of lines, most of them are quite shallow. Similarly to the previous rapid, the Jiri executed a less than perfect line and landed on some underwater rocks at the bottom. Markus managed to get stuck in the shallows and was forced to walk around the falls. Upon inspection of the rapid in low water (courtesy of Google maps in the car on the way back) it became obvious that the only underwater rocks are located where we tried to shoot the waterfall.

The rest of the trip is predominantly grade 2-3 with some flatwater until you reach the carpark rapids. The local are obviously keen paddlers having crated some man-made rapids in an easy stretch of the river by carefully placing vehicles in the river with such precision to rival Penrith’s slalom setup. Luckily the river is quite wide and the obstacles can be negotiated safely.

Overall, this is a very pleasant trip suitable for the lesser experienced paddlers. 0.34m is close to the minimum water level but the river can be easily paddled at a higher level provided care is taken on “Virgin Killer Falls” and the more overgrown sections. The waterfall would make an awesome lunch spot in the summer. 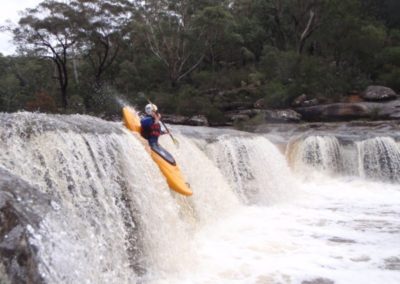 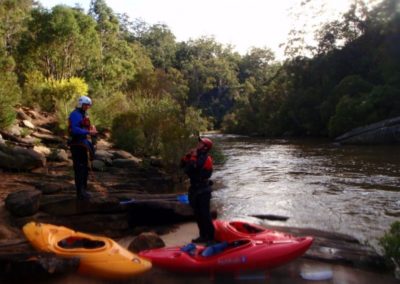 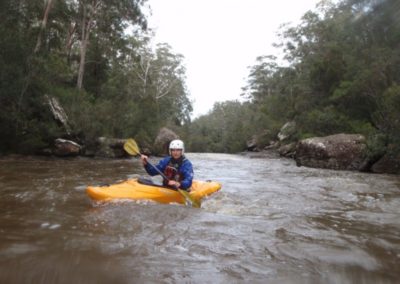 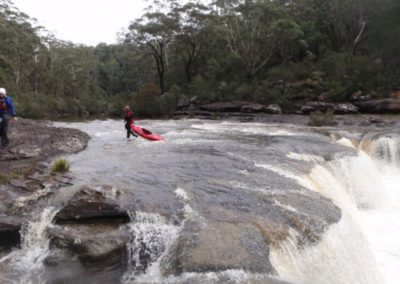 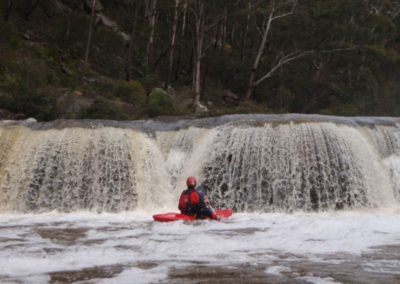 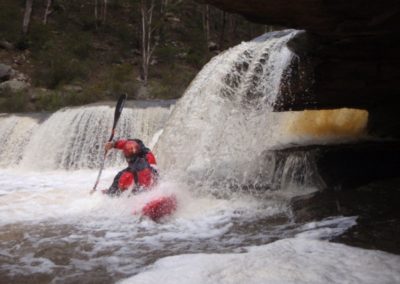 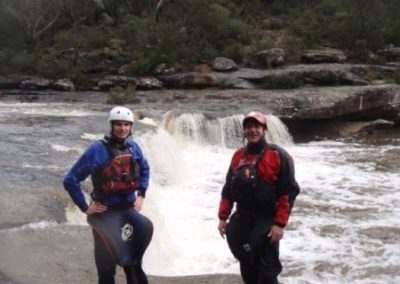 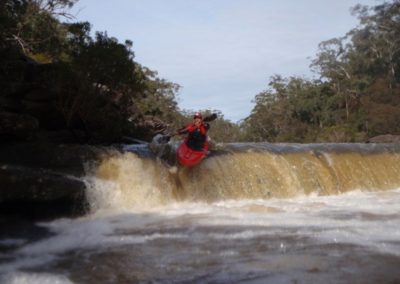